Skip to main content
FAQ
You are here
Home » Companies

THE SUSTAINABLE DEVELOPMENT APPROACH OF THE CONSORTIUM STADE DE FRANCE

The Consortium Stade de France defined its sustainable development approach in 2009 and deploys it through successive action plans. It has been an active member of the UN Global Compact since 2012.
In addition, on June 11th 2018, it signed the Green sporting facility managers’ charter. Through this charter, it commits, alongside the Ministry of Sport and many other actors in sport (event organisers, stadiums and other sporting facilities) and with the expertise of the WWF, to 15 quantified objectives concerning all sustainable development aspects of operating Stade de France.

Every two years, Stade de France publishes a CSR report to report on the concrete results of its commitment to sustainable development.

- Our CSR actions in 2019 and 2020
In 2019 and 2020, Stade de France continued to roll out its sustainable development action plan: work with local young people, actions in favour of sick children, waste sorting and recycling (new biowaste channel), etc. Despite the suspension, from March 2020, of the company's normal activity, it has worked to strengthen its environmental friendliness in terms of supply: preparation of the new refreshment stand catering offer using a short-channel model and 100% French and seasonal floral decorations in VIP areas direct from horticulturalists. 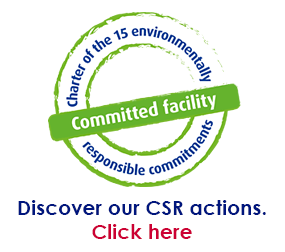